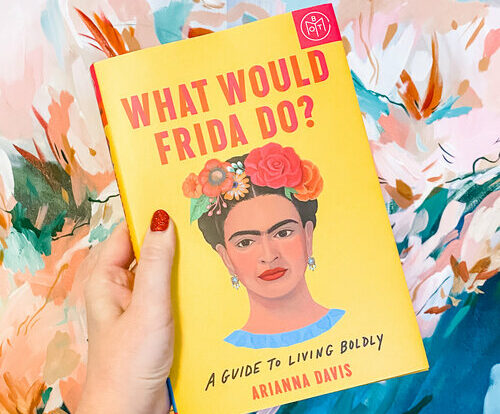 Frida Kahlo is a Mexican painter and was one of the nineteenth century’s most famous and well-known artists. Kahlo conveyed much of her inner anguish and chronic pain via her many artworks, with her strong and emotional symbolism interwoven in every piece.

Frida Kahlo: Who Was She?

Frida Kahlo was a Mexican artist. She used Mexican culture to fuel and inspires many of her introspective self-portraits and surrealist works. Kahlo had a hard life, plagued by persistent agony caused by disease and accident. In addition, she has experienced emotional pain as a result of unsuccessful relationships that were exacerbated by jealousy and betrayal. Her husband, muralist Diego Rivera, frequently had affairs with other women, prompting Kahlo to start having extramarital experiences. However, through her art, Kahlo achieved success and left a lasting legacy that endured long after her death. La Casa Azul (the Blue House), her family’s home in Coyoacán, later became the Frida Kahlo Museum (Museo Frida Kahlo).

The Storyline of Frida Kahlo

Frida Kahlo is widely regarded as one of the most significant artists in modern history. But unfortunately, Kahlo suffered from severe discomfort from a young age, an ailment that would plague her for the rest of her extraordinary life. Here is a synopsis of Frida Kahlo’s wonderful life:

Frida Kahlo was born in July 1907 outside Mexico City. Guillermo Kahlo, her father, was a German immigrant and photographer. Matilde Calderón y González, Kahlo’s mother, was from Oaxaca (her father was a native Mexican and her mother was of Spanish descent). Kahlo, who had polio as a kid, was introduced to art at a young age, taking illustration classes from her father’s friend.

A near-fatal bus accident in 1925, at the age of 18, left Frida with an impaled pelvis and uterus and several fractured bones. Kahlo would be plagued by severe pain and infertility for the remainder of her life due to the tragedy. To brace her compromised spine, she had to wear plaster corsets (which she hand-painted while in bed). Her lover at the time, Alejandro Gómez Arias, who was also on the bus and had minor injuries, did not pay her any visits during her recovery. As a result, she was frequently alone, which led her to resort to painting.

Kahlo officially joined the Mexican Communist Party in 1927. (she had already dedicated herself to the Communist youth at age 13 due to emotions spurred on by the Mexican Revolution). So, She was reintroduced to Diego Rivera, a Mexican muralist, and painter she had met five years before as a youngster. Therefore, she married Rivera, who was 20 years her senior, in 1929. Kahlo began to embrace the indigenous features of her Mexican background, frequently dressed in traditional peasant attire to underline her anti-colonialist ideas.

4. Looking for a place to live:

By 1931, she and Rivera had relocated to San Francisco, where he worked on several murals before returning to Mexico for the summer. Rivera’s retrospective at the Museum of Modern Art would bring the pair back to New York City in the fall (MoMA). Kahlo and Rivera also briefly lived in Detroit, where Kahlo experienced pregnancy problems that resulted in a failed abortion and subsequent miscarriage. Despite Rivera’s desire to remain in the United States, Kahlo persuaded him to return to Mexico City, and he soon began an affair with her younger sister Cristina. Frida Kahlo and Diego Rivera finally reunited and petitioned the government on behalf of former Soviet leader Leon Trotsky and his wife, Natalia Sedova, for refuge.

Although Kahlo sold numerous paintings during her lifetime, her work was sometimes disregarded by people who cast her in the shadow of her husband. In 1938, art dealer Julien Levy invited Kahlo to his gallery in Manhattan for her first solo exhibition, in which artists visited Georgia O’Keeffe and Isamu Noguchi and novelist Clare Boothe Luce.

Despite a disappointing exhibition in Paris in 1939, Kahlo continued to succeed in the United States despite dealing with various health challenges. She had multiple procedures, including a failed bone transplant and bronchopneumonia, and infection. In addition, due to gangrene, her right leg was amputated.

In 1954, Kahlo became gravely ill after participating in a protest against the CIA invasion of Guatemala with Rivera. She died just a few days later. Her death was attributed to a pulmonary embolism.

Frida Kahlo was inspired by folk art and her own culture. Among the distinguishing features of Kahlo’s work are:

Surrealist André Breton classified Kahlo’s work as a surrealist (specifically, a “ribbon around a bomb”). However, Kahlo disagreed, claiming that she had just painted her world.

To express her emotional state, Kahlo frequently used animal imagery (such as monkeys and hummingbirds). She also included religious imagery in several of her works, such as Christian and Jewish themes.

As a political declaration of independence and Mexican nationalism, Kahlo featured artifacts, fruit, and birds endemic to Mexico in her work.

Many of Kahlo’s earlier works contained veiled sexual imagery, which she did not disguise in her later works. Kahlo overtly references female anatomy in Still Life with a Parrot and Flag (1951), displaying a fruit resembling a vagina with a Mexican flag painted within.

The Most Famous Paintings of Frida Kahlo 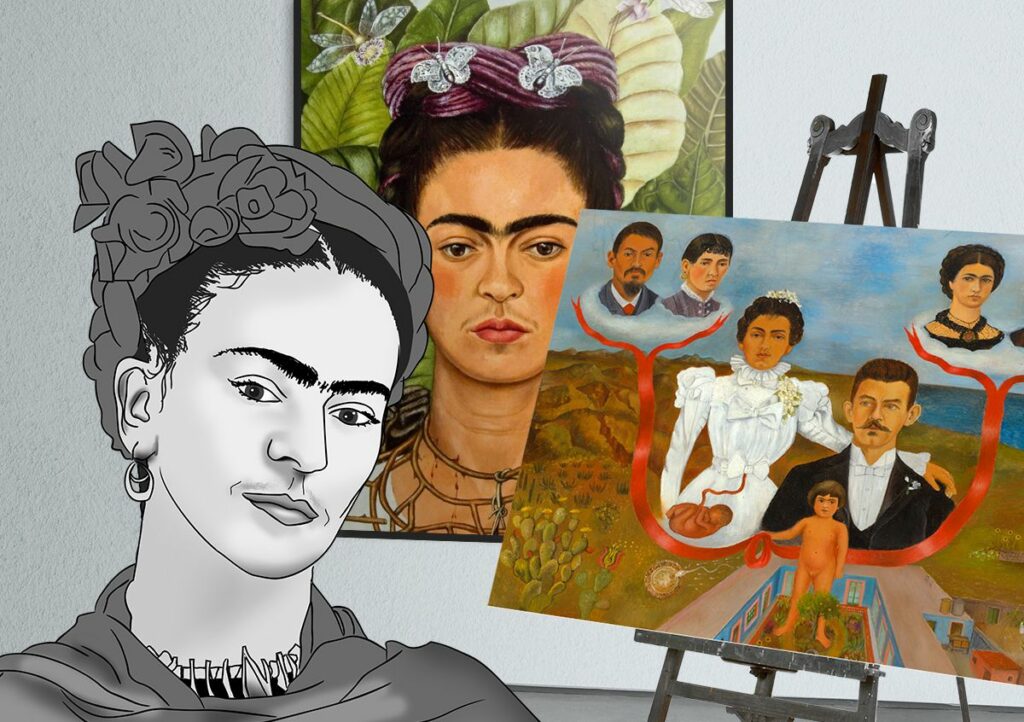 Kahlo would produce about 200 paintings, many of which were still-lifes or self-portraits. Kahlo’s most well-known works include:

Kahlo is represented in this picture bleeding in a bed with her heart exposed and scarlet ribbons connecting her to six images (including a fetus and a snail). According to experts, this motif represents Kahlo’s struggle with miscarriage and infertility.

The iconography depicts two Fridas, one in a European-style gown with her heart cut out and the other in a modern Mexican-style dress with the heart put over her chest. Scholars regard this artwork as another expression of Kahlo’s feelings after her divorce from Diego Rivera.

3. Self-Portrait with Thorn Necklace and Hummingbird (1940):

This painting features a monkey and a black cat sitting over either shoulder, with a deceased hummingbird tied to the thorn necklace she wears. According to scholars, this artwork represents her emotional state following her divorce from Diego Rivera. The thorns pierce her neck, but her look is stoic, symbolizing Kahlo’s capacity to bear the suffering.

Created following Kahlo’s spinal surgery, this oil painting represents Kahlo standing amidst a shattered, barren landscape, her nude body divided and an Ionic column in place of her spine. A metal corset binds her damaged body together, perhaps expressing Kahlo’s thoughts about her physical appearance after years of anguish and suffering due to childhood polio and the catastrophic bus accident.

What Impact Did Frida Kahlo Have on Art?

Frida Kahlo had a significant impact on art and culture. She was instrumental in introducing Latin-American culture to the art world, as well as a more bold portrayal of women in art. Kahlo’s candor regarding gender and sexuality has made her a star in LGBTQ+ communities and sparked a wave of innovative self-portraiture by artists of color around the world.

In addition, she has had a significant influence on current artists such as Julio Salgado, a gay Mexican-born artist, and activist, and Camile Fontenelle de Miranda, a Brazilian photographer most influenced by Kahlo’s The Broken Column. 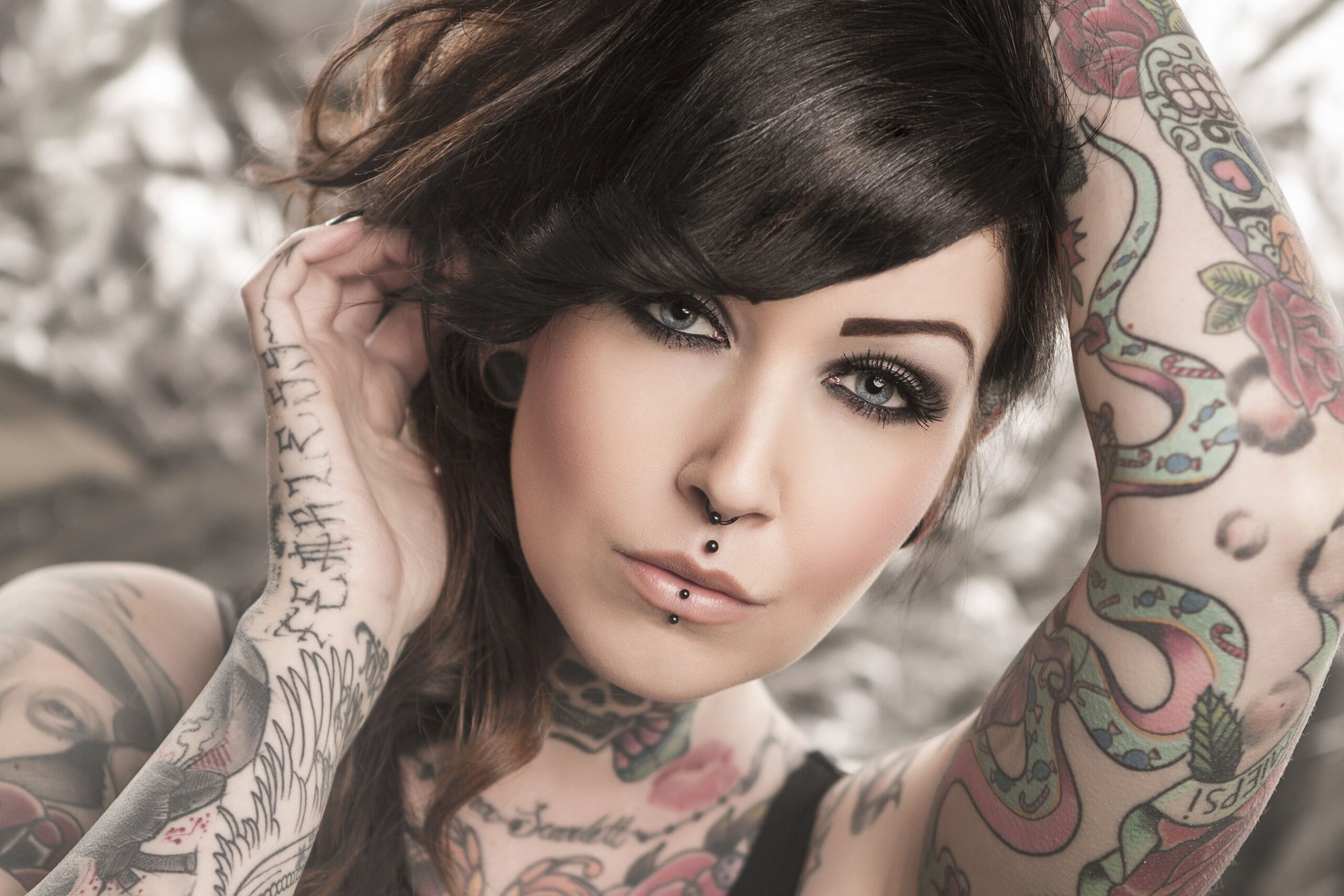 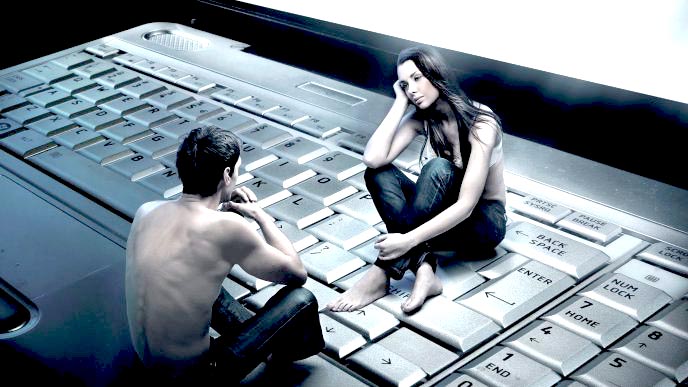